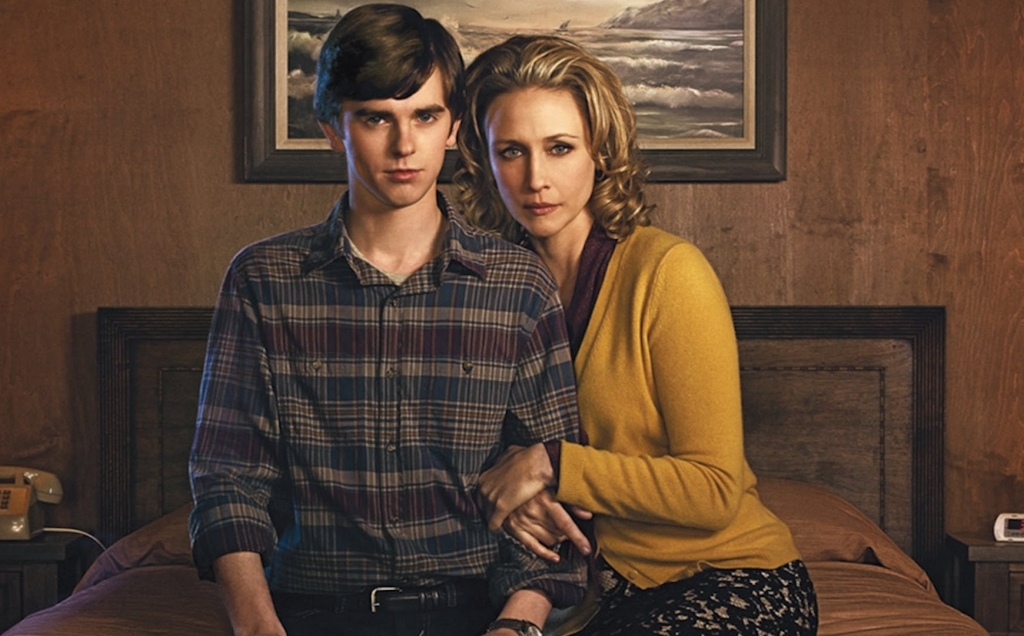 "Bates Motel" is a contemporary prequel to the genre-defining film "Psycho," and gives a portrayal of how Norman Bates' (Freddie Highmore) psyche unravels through his teenage years. Fans discover the dark, twisted backstory of Norman Bates and how deeply

Six months after the death of his father, Norman Bates (Freddie Highmore) and his mother Norma Louise (Vera Farmiga) purchase a motel in White Pine Bay. One night, Norman sneaks out to meet his new friend, Bradley Martin (Nicola Peltz), while the former owner, Keith Summers (W. Earl Brown), breaks into the house and rapes Norma. Norman returns and knocks him out. Norma then kills him, and the two hide his body in the harbor. Norman secretly keeps Summers' utility belt. Norma and Norman subsequently encounter Sheriff Alex Romero (Nestor Carbonell) and Deputy Zack Shelby (Mike Vogel) who show up that same night to look around.

While ripping out the carpet in Room 4, Norman finds a sketchbook filled with drawings of women being tortured. Norma's estranged son, Dylan Massett (Max Thieriot), arrives to stay shortly after the two move in. Norman and Bradley witness Bradley's father get badly burned in a car accident, and he later dies from his injuries. Meanwhile, Norman and Emma Decody (Olivia Cooke), his classmate with cystic fibrosis, look into the mystery of the sketchbook, and stumble upon a marijuana field hidden in the nearby forest. Dylan gets a job as a marijuana field guard, unknown to his mother and brother. Meanwhile, Norma becomes close with Shelby, who suggests that the town earns its wealth through illicit means.

Norman informs Norma that he kept the utility belt and it is missing. Shelby reveals that he took Summers' belt without Sheriff Romero's knowledge in order to protect Norma. Norman breaks into Shelby's house to get the belt back, and discovers a woman being held captive in Shelby's basement, like the drawings in the sketchbook. While Norman is still inside his house, Shelby arrives home. Dylan, having followed Norman, distracts Shelby so he can escape. Dylan later confronts Norma, now knowing what she did, and threatens to take Norman to stay with him. Dylan borrows money from his co-worker, Ethan (Terry Chen), so he can buy his own house, before a drug addict appears and shoots Ethan. Dylan rushes him to the hospital, and later returns to run the shooter down with his car.

Meanwhile, Romero finds a hand in the bay with Summers' wristwatch attached to it. Norman visits a grieving Bradley at her house, and the two have sex. Norma is arrested for Keith Summers' murder, and Norman bails her from jail. Shelby, telling Norma he loves her, gets rid of the evidence incriminating her. Emma and Norman find Jiao (Diana Bang), the girl from Shelby's basement, in Summers' abandoned boat. They show her to Norma, and Jiao identifies Shelby as the man who has been assaulting her. Dylan and Norman throw Summers' belt into the harbor to protect their mother. Shelby finds Jiao staying at the motel, and she flees. He then holds the Bates family at gunpoint and assaults Norma, causing Norman to attack him. Dylan then kills Shelby, but when Romero shows up, he says he'll tell everyone he took care of Shelby.

Norma tells Dylan that Norman is responsible for his father's death: Norman killed him in a fit of rage after seeing him hitting Norma, but doesn't remember any of it. The motel gains a customer, Jake Abernathy (Jere Burns), who says he reserves Room 9 for a week every two months. Norma hires Emma to work at the motel. Norman plans to tell Bradley that he loves her, but she tells him that they are not meant for each other. Jake reveals to Norma that he knows the full story about Shelby and Summers' sex-slave business, and Norma kicks him out of the motel.

Meanwhile, Norma is horrified to find the autopsied corpse of Shelby on her bed. After receiving threats, Norma attempts to put the motel up for sale, but the realtor tells her it won't sell. Bradley finds love letters exchanged between her father and someone known as "B" while searching her father's office. Norma is held at gunpoint by Jake, who reveals that Shelby owed him $150,000; he threatens to kill her and her sons unless she delivers it to him. Even though she doesn't have the money, Norma agrees. She informs Romero of Jake's threats, and he promises to take care of it. Norma reveals to Norman a secret: when she was a teenager, her brother forced her to have sex with him. Romero goes to the docks to meet Jake, and shoots him multiple times. Norma witnesses this, and Romero says she should trust him.

Emma, who has developed romantic feelings for Norman, agrees to go with him to the school dance as friends. While there, she notices his frequent glances toward Bradley, and she leaves. Bradley's boyfriend becomes jealous and punches Norman. His English teacher, Miss Watson (Keegan Connor Tracy), tends to his injured eye and takes him to her house. While there, she goes to her room to change, completely visible to Norman. A hallucination of Norma convinces him that Miss Watson is seducing him. When Norman returns home, he tells Norma that Miss Watson was going to drive him, but the next thing he remembers is running home. Miss Watson's corpse is shown with her throat slashed, wearing a "B" necklace.